Augmented Dissent: How Citizens Use Social Media and the Internet in a Protest (A Case Study of the Ukraine Euromaidan Protests of 2013-2014)
E-Mail 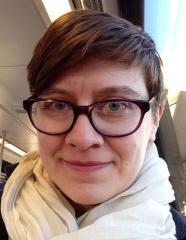 ABSTRACT
This dissertation research project uses the Euromaidan protests in Ukraine to inform and shape a theory of augmented dissent. It helps explain the complex ways in which protest participants guided by the political, social, and cultural contexts engage in dissent augmented by ICTs in a reality where both the physical and the digital are used in concert. The purpose of this research is to conceptualize the use and perception of ICTs in protest activity using the communicative affordances framework.
Through a mixed-method research approach involving interviews with protest participants, as well as qualitative and thematic analysis of online content from social media pages of several key Euromaidan protest communities, the research project examines the role ICTs played in the information and media landscape during the Euromaidan protest. The research findings provide in-depth insights about how ICTs were used and perceived by protest participants, and their role as vehicles for information and civic media content. The study employs the theoretical framework of social media affordances to interpret the data gathered during the interviews and content analysis to better understand how digital media augmented citizens’ protest activity through affording them new possibilities for dissent, and how they made meaning of said protest activity as augmented by ICTs.

BIOGRAPHY
Tetyana Lokot is a Ukrainian researcher and Assistant Professor at Dublin City University, Ireland. She was a Bucerius Ph.D. Fellow as a doctoral candidate at the Philip Merrill College of Journalism, University of Maryland, USA, where she gained her doctoral degree in 2016. She studies digital media, activism, protest and internet governance in Ukraine, Russia and other post-Soviet countries. Tetyana also holds an M.A. in journalism from National University Kyiv Mohyla Academy in Kyiv, Ukraine. Her forthcoming book on augmented dissent in Ukraine and Russia is slated to be published in the spring of 2020.

Lokot, T. (2018). Be Safe or Be Seen? How Russian Activists Negotiate Visibility and Security in Online Resistance Practices. Surveillance & Society, 16(3), 332-346

Lokot, T. (2018). Urban Murals and the Post-Protest Imagery of Networked Publics: The Remediated Aftermath of Ukraine’s Euromaidan on Instagram. WiderScreen, 1-2/2018. Available at http://widerscreen.fi/numerot/2018-1-2/urban-murals-post-protest-imagery-networked-publics-remediated-aftermath-ukraines-euromaidan-instagram/

Lokot, T. (2016). Augmented Dissent: The Affordances of ICTs for Citizen Protest (A Case Study of the Ukraine Euromaidan Protests of 2013-2014) (Doctoral dissertation)